A new drawing of West Bow or Victoria Street; one of Edinburgh’s iconic streetscapes. 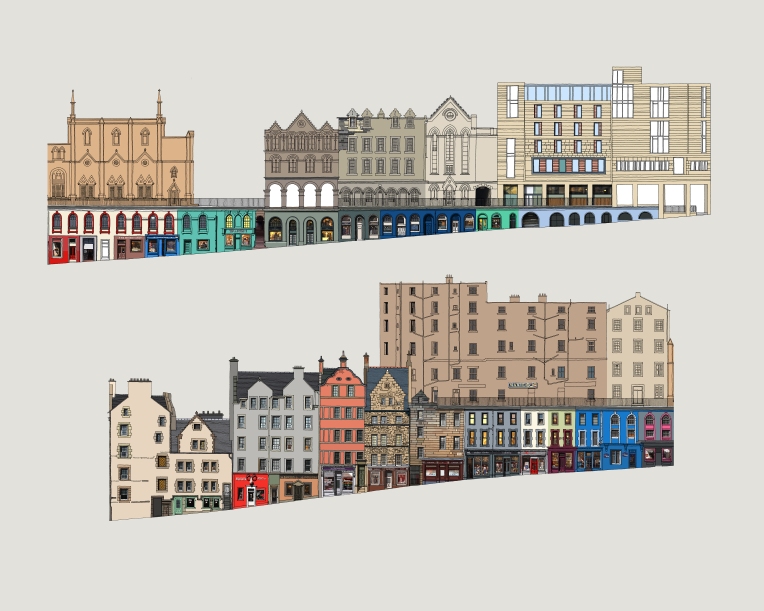 There is still a little editing to do on the upper half, but the drawing is all but complete. I wanted to explore a different way of projecting the image of a street and so turned to an ‘unfolded’ (or in this case flattened) architectural edit of the street as it curves its way from the Grassmarket up to the George IV Bridge.

Victoria Street was built between 1829-34 as part of a series of improvements to the Old Town, with the aim of improving access around the city. Inspired by Thomas Hamilton’s drawing of 1830, I decided to map the facades and context to reflect the current vibrancy of this beautifully curving landmark.

Historic Environment Scotland’s archives have no drawings beyond Hamilton’s measured elevations of 1830 which records the eclectic properties that pre-dated the late Georgian redevelopment that we see today.  My drawing updates this and captures the equivalent contemporary  elevations – drawn by hand and digitally coloured to celebrate one of our most visited streets.

My drawing is available to order in various formats as a giclee print. As a continuous coloured strip it measures 1.4m wide and so can be split into halves, resized or reformatted to suit requirements. The top image in this post is designed to fit a standard 70cm by 50cm frame so is slightly smaller than a standard A1 sheet. Please get in touch if you would be interested in ordering one. There is something very appealing about the panoramic, unfolded street though!

40/100. Another lunchtime stroll along the beach to Fisherrow - quite breezy today though so a few wobbly lines.
39/100 a lunchtime wander along to Fisherrow. Very quiet and grey day today.
38/100 Fisherrow Harbour this evening, lovely sunny summers night. Gave up with the watercolour pen as its too streaky so gone back to the pans and brush. Sticking to one tone though.
37/100 absolutely the best fish and chips I've had for years @reneesplaice in #lymmvillage on the way home. I could draw here for weeks I think, such a great spot. Quick sketch on the journey home to Scotland.